Contact us today for a obligation free quotation
[email protected] 0614462607

What all property owners need to know about electric fencing 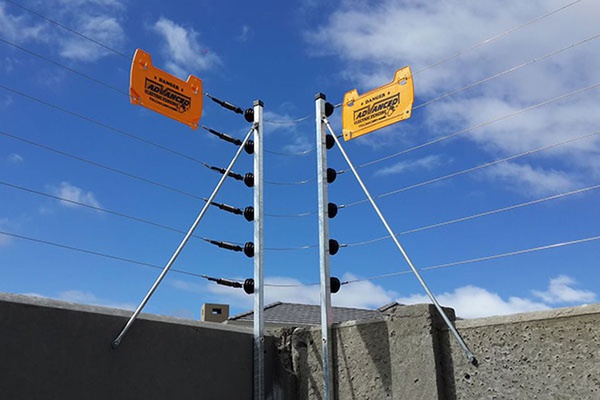 In South Africa, electric fences are a popular security solution for commercial, industrial and domestic installations but many property owners are oblivious about the legal requirements for their electric fencing or that such requirements even exist.

While electric fencing may be considered the most effective method of disheartening intruders, it must always be remembered that, unlike alarm systems and CCTV cameras, electric fencing is potentially dangerous.

Why the need for new laws for electric fencing?

Although there was legislation for non-lethal electric fences in the 1980s, this was largely unregulated because electric fences were mainly installed on farms. Then, as electric fences became more commonplace in cities and suburbs, it became necessary to update legislation to protect the public. At that time, the ‘loopholes’ in legislation were being exploited by a proliferation of ‘electric fence installers’ as every Tom, Dick and Harry climbed onto the bandwagon and were installing electric fences – and the unwitting public had no way of knowing whether their fences were safe and/or compliant.

On 25 March 2011, the government published amendments to the Electrical Machinery Regulations within the Occupational Health and Safety Act No. 85 of 1983. Some of those amendments related to non-lethal electric fences and were intended to set product and assembly standards to protect consumers from potentially dangerous products and inferior installation methods. The new laws also sought to obliterate telephone, television and wireless interference resulting from imperfectly installed systems and dubious earthing.

The amendments tightened up the industry and made it mandatory for electric fence installers to undergo tough training before being able to register with the Department of Labour as an Electric Fence System Installer.

The new laws also had extensive implications for property owners.

What about electric fences installed before 1October 2012?

Although an EFC (electric fencing certificate) is not required for electric fences installed before 1 October 2012, when the property is sold, the property owner will have to get an EFC. The registered person will issue an EFC based on the legislation that was applicable at the time the fence was installed and on condition that the electric fence has appropriate earthing, the necessary warning signs, a compliant energizer – and it is safe.

Should an EFSI find that an electric fence is faulty or defective, he/she shall refuse to issue the EFC.

Electric fences installed before 1 October 2012 will also need an EFC when any major repairs or modifications to the system are done.

Who needs an electric fence certificate?

While sectional title properties don’t require an EFC to effect transfer, body corporates and business entities are legally responsible for the electric fence systems on their properties… And they can be prosecuted if their electric fence is found to be non-compliant, and they could find themselves in a civil court if someone has been injured by their non-compliant fence.

A registered EFSI who installs, alters or extends an electric fence system must ensure that an EFS certificate is issued for that work when it is completed.

Does my electrical CoC cover the electric fence?

The electric fence certificate (EFC) is required in addition to the electrical Certificate of Compliance (CoC) that property owners must have.

When a property with an electric fence is sold, both the electrical CoC and the EFC must be lodged with the conveyancing attorney before transfer can take place

What if I don’t have an electric fence certificate?

An EFC must be produced when requested by an inspector from the Department of Labour.

Should an electric fence be found to be non-compliant, the owner will have to have the system upgraded by a registered installer to comply with legislation within a specified period, or the owner will be forced to remove the entire system.

Most importantly, non-compliance has potentially expensive consequences for property owners who submit an insurance claim for a damaged electric fence, stolen household contents, or who find themselves at the wrong end of a personal liability claim and also have criminal charges to face.

If the electric fence system is not compliant and/or doesn’t have an EFC and the fence is damaged, for example, by a falling tree or the energizer is destroyed by lightning, the insurance company may not pay out. This could also be the case if the homeowner has listed the electric fence as a security measure and then submits a claim for items stolen during a burglary. A personal liability claim could also end rather badly if someone – a visitor, employee, a neighbor's child – is shocked or injured by the fence and the property owner doesn’t have the required EFC.

The ECA(SA)’s Electric Fence Certificate is a single-page and pale green in color, and each certificate has its own unique number.

The EFSI may attach other documents to the certificate, such as

A copy of the installer’s registration document.

A copy of the energizer's compliance certificate issued by an accredited test laboratory.

A detailed drawing of the installation.

A brochure or document that outlines the property owner’s legal obligations in terms of electric fencing.

Information for the property owner on maintenance of the electric fence.

What else should the property owner know about electric fencing?

Electric fencing must conform to the Electricity Security Installations Regulations, which means that:

Regulation 11 of the Electrical Machinery Regulations in terms of the Occupational Health and Safety Act No. 85 of 1983 must be fully complied with.

If angle brackets will extend into neighboring property, the neighbor's consent is required.

The placement and positioning of brackets are important so if angled brackets are used, the maximum outward angle is 45 degrees; and they must be installed on the inside of the boundary wall.

Electric fencing on top of walls must be at least 1,5m above ground level.

The fencing must be installed and operate in such a way that it won’t be hazardous or allow people or animals to become entangled in the wires.

Electric fences that are installed along public roads or pathways must be identified with compliant yellow warning signs at least 100mm x 200mm, which are also required at all gates and access points. In urban areas, the spacing between the warning signs must not exceed 10m.

It must not be possible for people and animals to become entangled in the fence.

In essence please be wary of who you hire to install your electric fencing.

We’ve been in the industry for nearly 30 years and the industry is ever expanding with new installers, convinced that they are able to install an electric fence according to the regulations.

Sign up and you will be the first to know the latest news, insider-only info, and more.